～Learning about Social Innovation in the U.S.～

In the summer of 2014, BEYOND Tomorrow conducted the BEYOND Tomorrow Summer Global Program – Summer Program in the U.S.. For this program seven students from Tohoku, overcoming the adversities of the Great East Japan Earthquake and Tsunami and aspiring to become global leaders, were selected and sent to New York and Boston. The participants visited people and groups who are the driving force behind activities to improve society through creative concepts. It is hoped that, through their experience in the U.S., the students will form a clear vision of their activities as leaders who will themselves guide society toward reform, and will consider their future careers from a broader perspective.

The students deepened their understanding of innovative thinking and design thinking for the purpose of creating a better society. They learned examples that they could use in Japan and in Tohoku. The students experienced different cultures by interacting with local people and were also able to fulfill their role as Tohoku ambassadors by communicating about the Great East Japan Earthquake and Tsunami and the current state of Tohoku’s recovery.

Seven high school students and university students who were living in Iwate, Miyagi, or Fukushima prefectures at the time of the Great East Japan Earthquake and Tsunami and who, overcoming the adversities of the earthquake and tsunami, have the will to become active leaders in the world. Participants were selected through an application process.
Particpating Student bios

Before the program in the U.S., the students participated in a one-night, two-day pre-orientation. During the orientation, students considered again the significance of their visit to the U.S., as people from Tohoku, and the kinds of things they hoped to learn through the experience in the U.S., as well as what they, as Tohoku ambassadors, wanted to communicate to people in the U.S. The students formed groups through discussion, and at the end they gave presentations in English.

Participants visited a variety of groups and individuals to learn the keys to how innovation contributes to society’s development in the U.S., which is the global center for innovation, as well as in what kinds of environments “social innovation” prospers. On the last day the students gave presentations on what they had learned for the leaders. 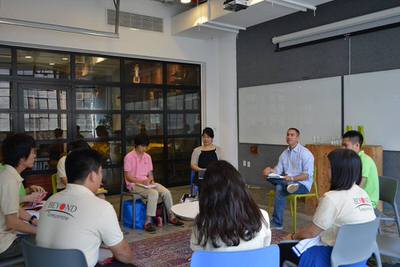 Visiting the Center for Social Innovation, which provides a co-working space for entrepreneurs. 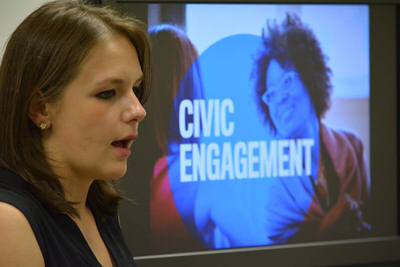 The session with Echoing Green, which provides support for starting new businesses through fellowship with young entrepreneurs. 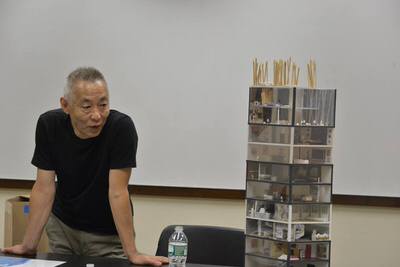 From architectural designer Stomu Miyazaki, students learned about how people chase their dreams, and how that leads to realization and maintained impact. 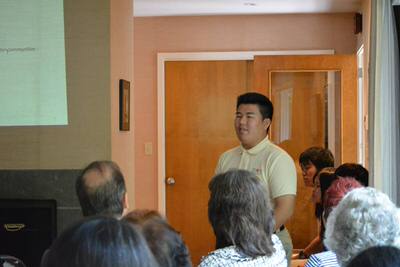 The U.S.-Japan Council and The Japan Society of Boston hosted a closing ceremony at Reischauer House. The students used performances and presentations to show what they had gained from the program to the leaders in U.S.-Japan relations in Boston.

Students heard from Japanese leaders who are active globally, and especially in the U.S., about how interesting and challenging it can be to work on an international level, giving the participants an opportunity to consider an international career. Through interaction with local young people of similar ages to themselves, the students renewed their determination to strengthen the bonds between Japan and the U.S. as future leaders. 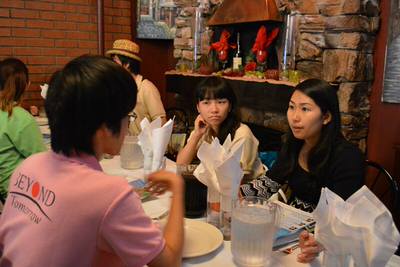 The students visited Ito En (North America) and had a discussion session with Ito En employees, who continue to work to promote the spread of Japanese culture in the world through business. 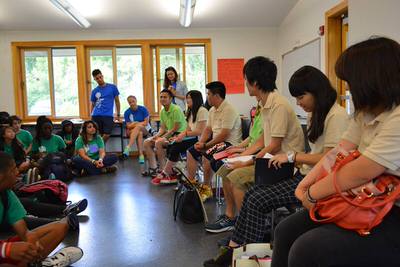 Cultural exchange with young people from the Boys and Girls Club of Boston. BEYOND Tomorrow has had exchanges with this club for three years, in Japan and in the U.S.

Communicating about Tohoku as it is now

Telling people in the U.S. about Tohoku as it is now, three years after the earthquake and tsunami. 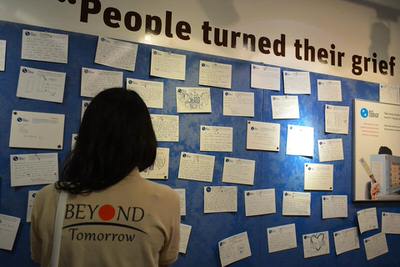 The students visited the 9/11 Tribute Center, interacting with family members who lost loved ones in the September 11 attacks, and discussing the significance of inheriting tragedy. BEYOND Tomorrow has continued its relationship with the center every year since 2012. A presentation for a class of students studying Japanese at Harvard University. The students gave a presentation about Tohoku as it is today for students conducting research on East Asia at the The University of Massachusett, Bostons. The students asked questions about the Japanese mindset that they noticed through the Great East Japan Earthquake and Tsunami.