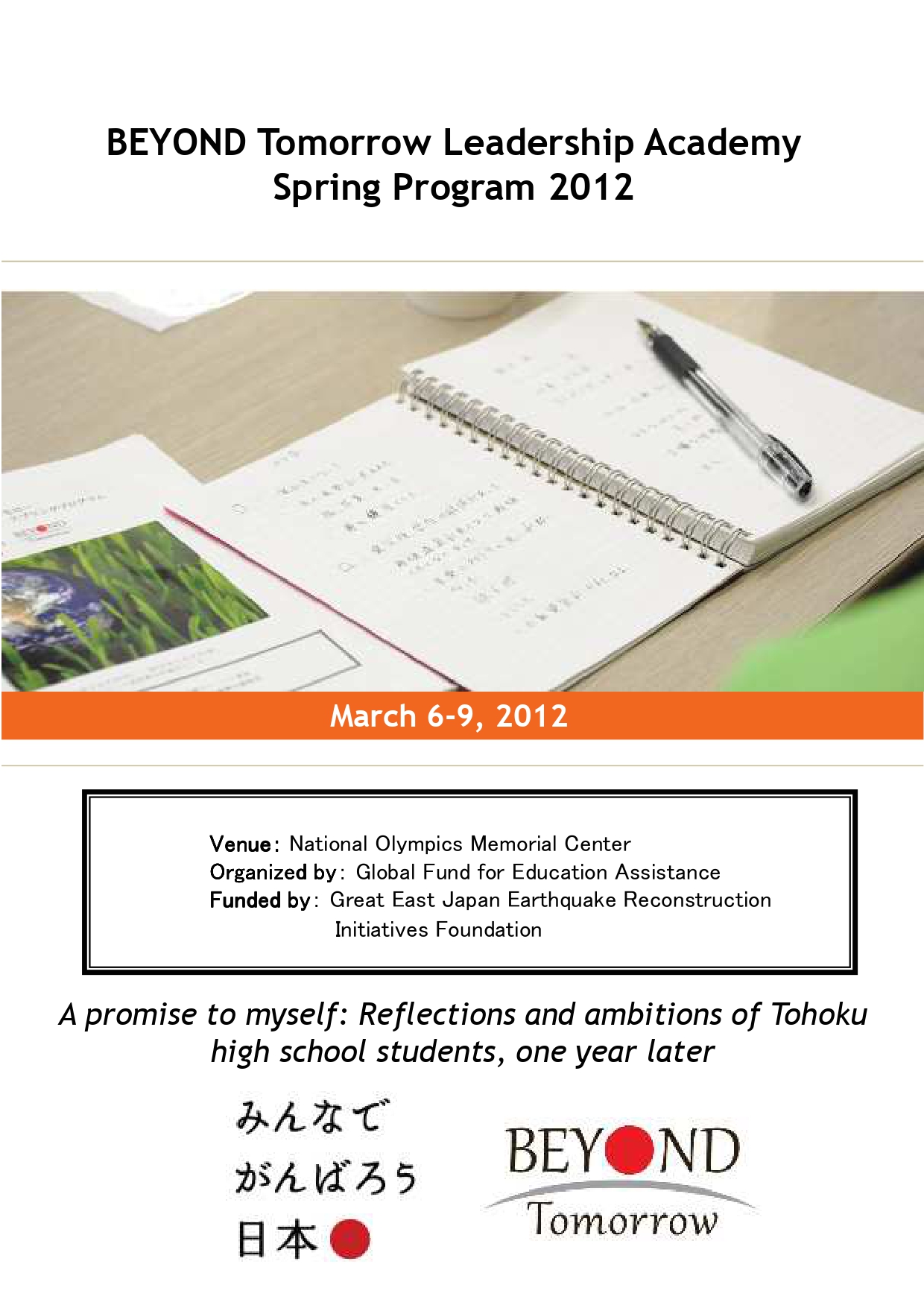 The BEYOND Tomorrow Leadership Academy is a one-year comprehensive leadership program. A year since the earthquake disaster, BEYOND Tomorrow Spring Program aimed to have the students face their future, sketch visions they should strive to achieve, and solidify their goals for their future lives as students.each student developed ‘A Promise to Myself,’ a plan of what they would accomplish in their new lives. The students took their first steps toward becoming future leaders.

The Spring Forum was held during the third night of the Spring Program to celebrate the participating students’ departure for a new chapter in their lives. The students, who have the potential to become future leaders, expressed passions for the future. Leaders, who are active in various fields, respond to these passions. The Spring Forum, which hosted many guests from abroad as well as from Japan, became a space where the hearts of the students and leaders who support them united.

“What is  the most important thing that the United States can do to help in the recovery process? My answer is to provide hope to these incredible young people who are here with us this evening and to all the young people in Tohoku region, because hopes and dreams of Tohoku and Japan as a whole are with  the young people of Tohoku.”

“I believe that your challenging experiences will be an important foundation for your future roles as leaders of Japan and of the world. Your experiences, while undoubtedly painful, have taught you about tragedy as well as human kindness, and these are the lessons I would like you to remember as you grow into leaders.”

“I remember many junior high school students and high school students throughout the United States who had car washes, bake sales, and ran marathons. They did not know who they were helping, but they knew that they had a special place in heart for the people in Japan and Tohoku region. So the U.S.-Japan Council is pleased to support the students like yourselves who will travel to the United States in the future and who become faces to all the Americans who believed that it was important to send a hand across the seas to support you and your families.”

“Every time we face these great adversities as a country, the Japanese society has only gotten stronger. The heroes who played a central role during these times were always the young people. Heroes will arise from the younger generation. We will overcome this crisis and become stronger than before. And I strongly believe that these students of BEYOND Tomorrow will be at the heart of Japan’s regeneration.”

What must we accomplish because we are the ones who survived the disaster? – Based on discussions, interviews with leaders from various fields, and dialogues with mentors, each student developed ‘A Promise to Myself,’ a plan of what they would accomplish in their new lives. The voices of Tohoku students have been sent out on the website on the day of 1-year anniversary since the Great East Japan Earthquake.

This program was funded by the Great East Japan Earthquake Reconstruction Initiatives Foundation. BEYOND Tomorrow is also supported by many organizations and individuals. We would like to thank everyone for their support and cooperation.