BEYOND Tomorrow is a program that offers leadership education for children affected by the Tohoku earthquake and tsunami.  The aim of the program is to allow these children to overcome their tragic circumstances and encourage them to continue to pursue their dreams, growing into socially-conscious citizens of the world.  Towards this goal, the program sponsored students to attend the Summer Davos Junior Leaders Program, which took place in Dalian, China on September 11th – 16th, 2011. The seven sponsored participants were high school and college students who were all victims of the Tohoku earthquake and tsunami, some of whom even lost their parents.  These students were selected for their ambitiousness and aspirations. They attended the Summer Davos Forum in Dalian, China to not only express their gratitude to the world for its support following the disaster and communicate first-hand experiences from the Tohoku region, but to also gain a unique international experience.  Typically, only established leaders of the world are invited to the prestigious Summer Davos Forum, and having student representatives at the Forum is extremely rare.  This group was the first set of students to ever attend this Forum from Japan. 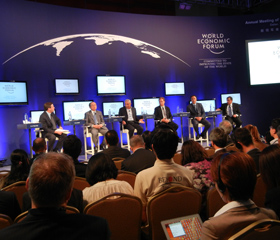 Officially called the Annual Meeting of the New Champions, the Summer Davos Forum was founded in 2007 and is an annual global forum hosted by the World Economic Forum, a Geneva-based non-profit organization. Thus far the forum has been held in Tianjin and Dalian, China, where 1,500 leaders from a wide range of fields gather from around the world to meet.  Participants include politicians, business people, journalists, NGO workers, and artists, offering diverse perspectives towards the themes that are discussed during the forum. This year the forum was held at Dalian, China on September 14th – 16th.  At the opening ceremony, Chinese Premier Wen Jiabao gave the ceremonial address.  Participants from Japan included Mr Yorihiko Kojima, Chairman of the Board of Mitsubishi Corporation and Mr Heizo Takenaka, Professor and Director of the Global Security Research Institute of Keio University.  There was also a strong representation from the media, such as major newspapers, magazines and television companies. Given the importance of understanding the aftermath of the Tohoku earthquake and tsunami, a special session was created this year to highlight the young Japanese victims.

2. Learning from leaders of the world 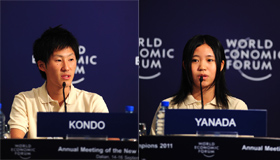 Being an ambassador to the world by communicating personal experiences of the Tohoku earthquake and tsunami to global leaders The seven students were active participants at all of the session of the Summer Davos Forum and described the current situation in the Tohoku region speaking as panelists and asking questions, appealing to the global leaders.  In particular, at the “Tohoku to the World” session, four students spoke about their personal experiences of the Tohoku earthquake and tsunami, as well as their ambitions towards the region’s recovery, moving the audience to tears and garnering a standing ovation. 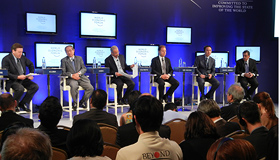 Global leaders had other opportunities to hear live voices from the Tohoku region as the students spoke at private events such as a breakfast meeting for financial professionals and a Japan Night sponsored by the Japanese government. Many of the leaders participating in the forum mentioned that they were the ones who learned the most in hearing the Tohoku students speak.

2. Learning from leaders of the world 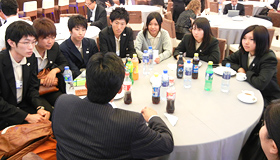 Inspired by the top leaders who spoke at the Summer Davos Forum, reflecting on what Japan’s future role is within the global framework, what is expected from the recovery of the Tohoku region, and what the students can do and achieve on their own The Summer Davos Forum was a unique opportunity for the seven students to interact directly with renowned leaders of the world,such as Heang Chorr (Director, McKinsey & Company) and Heizo Takenaka (Director, Global Security Research Institute, Keio University) and Yoshito Hori（CEO,GLOBIS Corporation）, receiving advice and guidance. 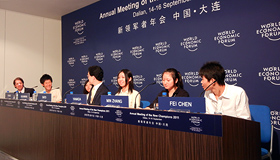 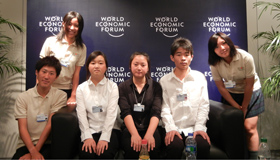 Gaining a deeper understanding of the people and circumstances in China in order to foster a stronger Japan-China relationship The highlight of international interactions was speaking to three students who were orphaned by the Sichuan earthquake. As peers who have both experienced natural disasters, we immediately bonded and had an opportunity to speak in depth about Japanese and Chinese cultures. Furthermore, through our joint press conference, we were able to appeal to the world the importance of being prepared for natural disasters and their risks. 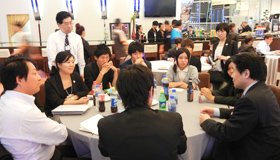 Thinking about the future and making dreams more concrete by individually interacting with leaders who support BEYOND Tomorrow The founders of BEYOND Tomorrow acted as a mentor for each student, offering support and advice during the forum. 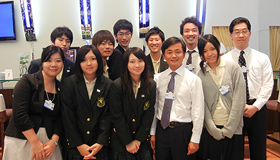 “The five important things in life: 1) Be tolerant. 2) Life is about constantly restarting. 3) Do not hesitate to seek help from others. 4) Have courage. 5) Experience the world.” Heang Chorr (Director, McKinsey & Company) 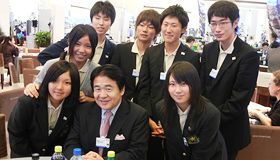 (In discussing how to stay hopeful during a time of daily struggles) There is a saying that goes, “Continue to dream while plowing.” It is important to keep fulfilling your everyday responsibilities without losing sight of the larger goals in life. Heizo Takenaka (Director, Global Security Research Institute, Keio University)

Before the students left for Dalian, China, they participated in atraining session that spanned a day and a half in Tokyo. Communication training/ speech training/ English skills.

He resides in an area 70km from the Fukushima nuclear plant. Daily life has been constrained because agriculture, fish, and livestock from Fukushima prefecture have been prohibited Having experienced the terror induced by a nuclear accident and continuing to remain resident in the area despite ongoing fears, Mamoru longs to send a message to the world concerning energy issues. He would like to communicate to the world’s leaders the need for comprehensive discussions with regard to energy policy.
Eisuke is a resident of Kesennuma – one of the areas which received the highest levels of damage, and he just escaped death having evacuated in terrifying circumstances immediately following the earthquake. The hotel run by his parents was used as an evacuation shelter through which a large contribution was made to the community; however the business received a crippling blow. Eisuke would like to convey to the world the things he has learned from his close communication with victims of the disaster and from those engaging in the recovery and reconstruction efforts.
Maria’s father was killed in the tsunami. She acted as high school student ambassador for orphans of the Eastern Japan Great Earthquake and Tsunami, travelling to New York City to raise the attention of the world to the current situation for orphans who lost parents in the Tohoku tsunami and the necessity for emotional care, alongside young people orphaned by the New York 9/11 Terrorist attacks and Hurricane Katrina. She says, “There are still people who are suffering more than me. For those people I really want to try my best. I want to interact with people from many countries, and talk to a variety of different people”.
His family home was completely destroyed by the earthquake. His family is now staying with an acquaintance having moved to Morioka. In the future Kazuki would like to engage in rejuvenation of local areas and promotion of the area’s special qualities. He thinks he would like to undertake a role which allows him to act as a bridge between global and local domains. He states, “I would like to convey gratitude for all the help offered in response to the earthquake disaster. On the other hand, I do not want this situation to be treated as a short term boom. I want it to be viewed as a long term problem and not something just relevant to this year.”
Junpei’s home was completely destroyed by the tsunami. Both his parents lost their jobs, and they continue to live in temporary housing. He also lost many of his friends to the tsunami. In the future he hopes to study urban planning, and would like to work in the City Planning Division of the prefectural office and contribute to the regeneration of affected areas through starting with the development of reassuringly safe towns prepared for potential disasters. He states, “I want to convey to the world what the current situation is actually like in the devastated areas. I want to talk about the large number of people who thought there was no way a tsunami would come so far inland and who got swept away, and about the circumstances people face now.”
Herself injured by the tsunami, she spent two nights atop her roof while waiting to be rescued. She lost her mother and grandmother to the tsunami, and her Great-grandmother remains unaccounted for Sayaka is currently enrolled in the Special Advancement Course at high school, preparing for entrance into University whilst living on her own in an apartment. In this year’s summer holidays she undertook short-term language study in Canada, learning English. Of the upcoming program, she says, “I feel honored to be given an opportunity to tell Tohoku stories to the leaders who can make a difference for the world”.
She hails from a middle school in Kamaishi, which had a particular focus on performing fire and disaster drills to prepare for disasters. During the tsunami the school and its students including herself played a crucial role in leading local lower school students and citizens to safety, saving a number of lives. Standing in safety from high ground, she watched the tsunami wipe her town away without a trace. She would like her life’s mission to save even just one person from becoming a victim of an earthquake or tsunami through sharing her experience, and in the future she thinks she would like to become an actress.
Profile is displayed when you click a photo 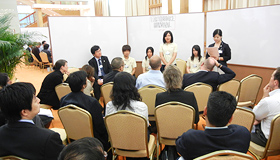 “Annoucing the Participants for the Summer Davos Junior Leaders Program” News Release: Presenting the launch of the Global Fund for Education Assistance and the project “BEYOND Tomorrow”