In the summer of 2014, BEYOND Tomorrow conducted the BEYOND Tomorrow Summer Program in Europe 2014. The program was undertaken as part of the BEYOND Tomorrow Summer Global Program 2014, which also included the programs in the U.S. and Asia. Students from Tohoku, overcoming the adversities of the Great East Japan Earthquake and Tsunami and aspiring to become global leaders, travelled to France and Germany and learnt about Europe’s history and diversity. Participants also visited Airbus to see and learn firsthand about how a dynamic business actually works. This week long experience in Europe enabled the students to deepen their understanding of global businesses, and broadened their perspective with respect to their own careers.

To search for ideas that would assist in Tohoku’s recovery by learning about how Europe’s diversity of culture is made use of in the business world. To act as Tohoku ambassadors by communicating their experience of the Great East Japan Earthquake and Tsunami and Tohoku as it is today to the people of Europe.

Ten high school students and university students who were living in Iwate, Miyagi, or Fukushima prefectures at the time of the Great East Japan Earthquake and Tsunami and who, overcoming the adversities of the disaster, have the will to become active leaders in the world. Participants were selected through an application process.

Before the program in Europe, the students participated in a one-night, two-day pre-orientation. During the orientation, students considered again the significance of their visit to Europe, as people from Tohoku, and what kinds of things they hoped to learn through the experience in Europe, as well as what they, as Tohoku ambassadors, wanted to communicate to people in Europe. The students formed groups through discussion, and at the end they gave presentations in English.

In Europe the students toured Paris, Toulouse, and Hamburg, had discussion sessions with people active in Europe, and visited Airbus, which was built through a joint effort of European countries. In Paris, participants had a formal visit to the Embassy of Japan in France, and the OECD, and in Toulouse and Hamburg students experienced presentations and factory tours through the business program with Airbus. Through these activities the students were able to learn just how much diversity contributes to business growth in Europe, and to get some ideas for Tohoku’s recovery.

While in Europe, the students visited Paris, Toulouse, and Hamburg, had discussion sessions with people active in Europe, and participated in a corporate program where they visited Airbus, which was built through a joint effort of European countries.

Talk to leaders active in Paris In Paris, the students made a formal visit to the Embassy of Japan in France, and gave presentations about Tohoku as it is now, after the earthquake and tsunami, in front of diplomats active at the forefront of Japan-France relations. In addition, they visited the OECD (Organisation for Economic Co-operation and Development) and from the Japanese people who worked there they learned of the difficulties and rewards involved in working for an organization made up of people from a wide range of countries. 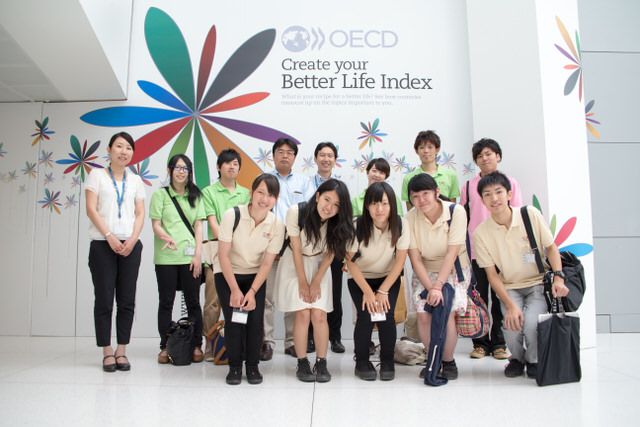 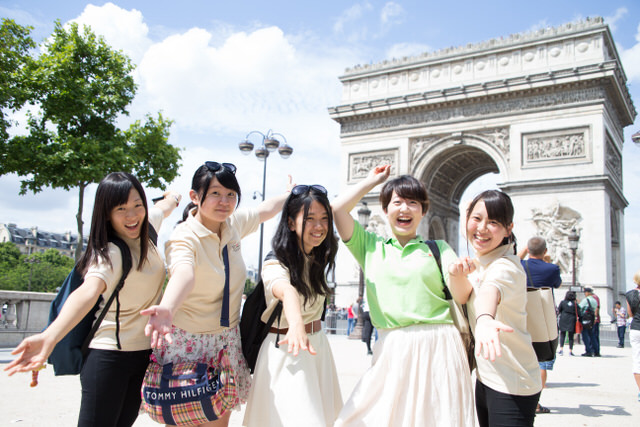 Visit to the head office of Airbus, a global leader in the aircraft business. In Toulouse, the students visited the Airbus head office. At Airbus, which attracts technology and minds of the highest level from all over the world, students learned how diversity contributes to business development and the future of the aircraft industry, and were able to get ideas for Tohoku’s recovery. Students were also able to communicate the current state of Tohoku to leaders active at Airbus. 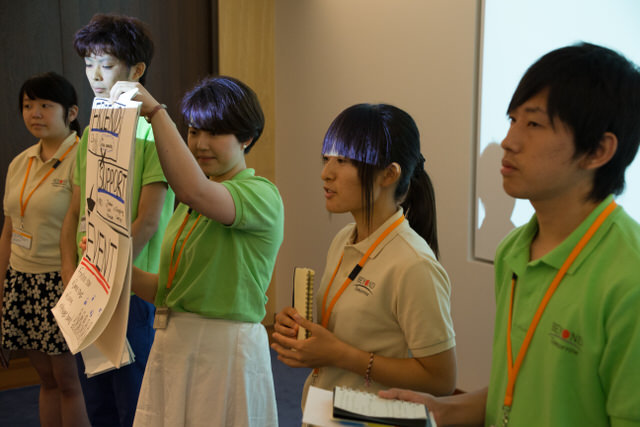 Presentation on the Great East Japan Earthquake and Tsunami at Airbus 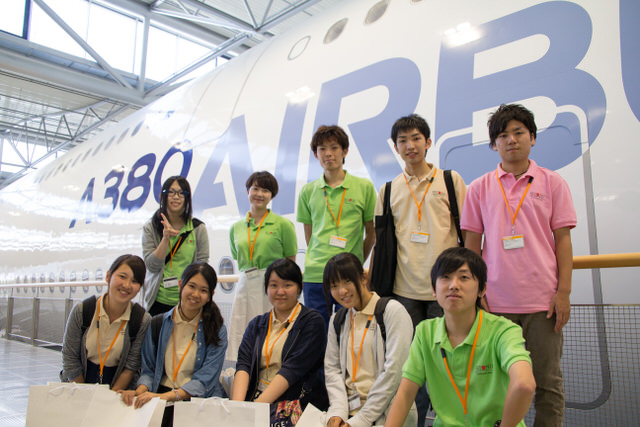 Tour of an Airbus aircraft 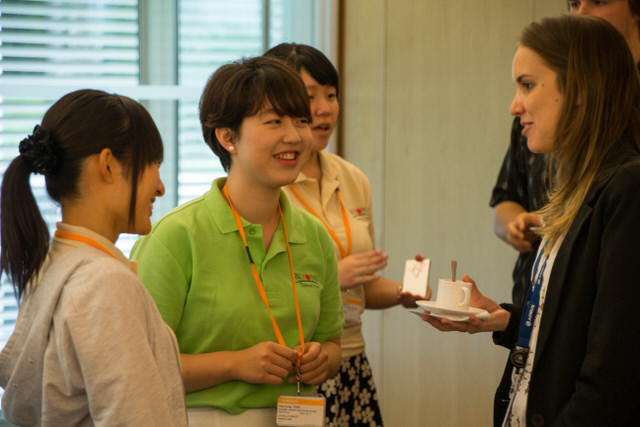 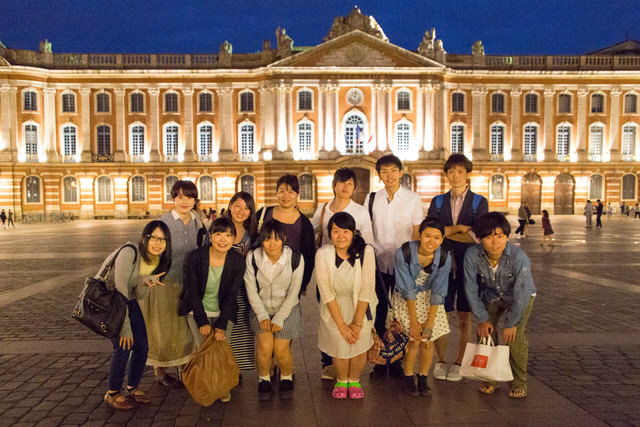 Talks with the young leaders at Airbus who will carry the company into the future In Hamburg, Germany, the students were able to visit an Airbus factory and a training facility educating the next generation of engineers. They had the opportunity to interact with the young people who have gathered from all around the world to devote themselves to their work at Airbus, at the highest levels of the aircraft business, and to give a presentation about the current situation in Tohoku. In addition, the students were able to present a final proposal for how to use the diversity they learned about at Airbus in Toulouse to aid Tohoku’s recovery. 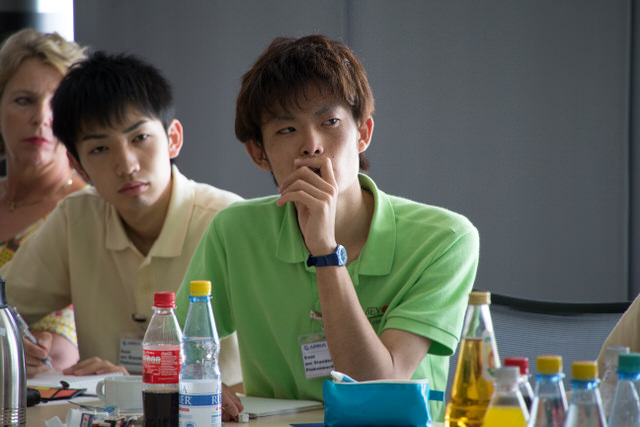 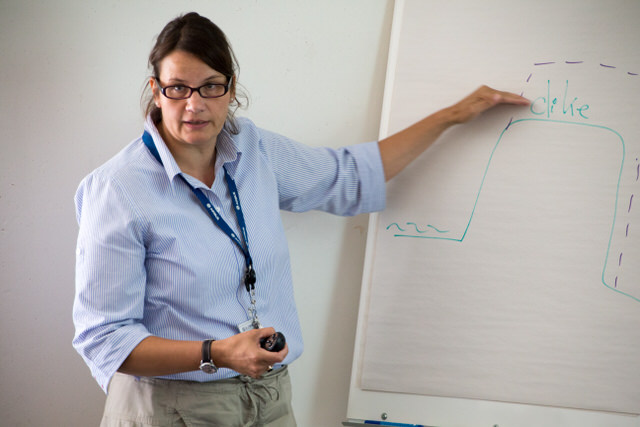 Presentation by an Airbus employee